From the 2021 Annual Report 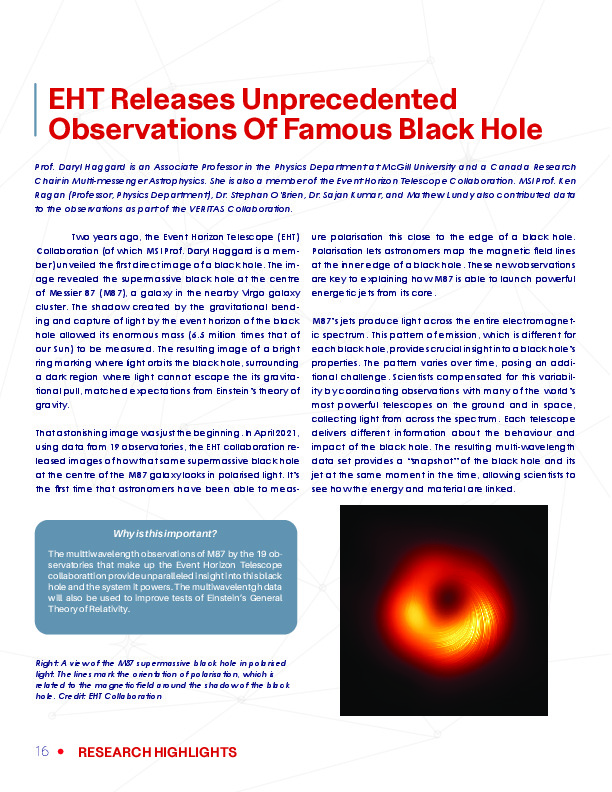 Spectacular new images of the supermassive black hole in M87. 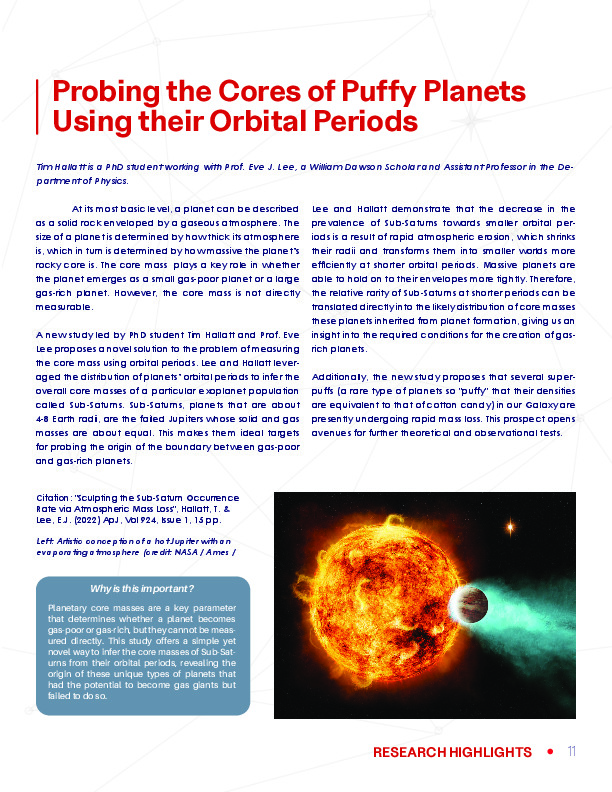 Probing the Cores of Puffy Planets Using their Orbital Periods 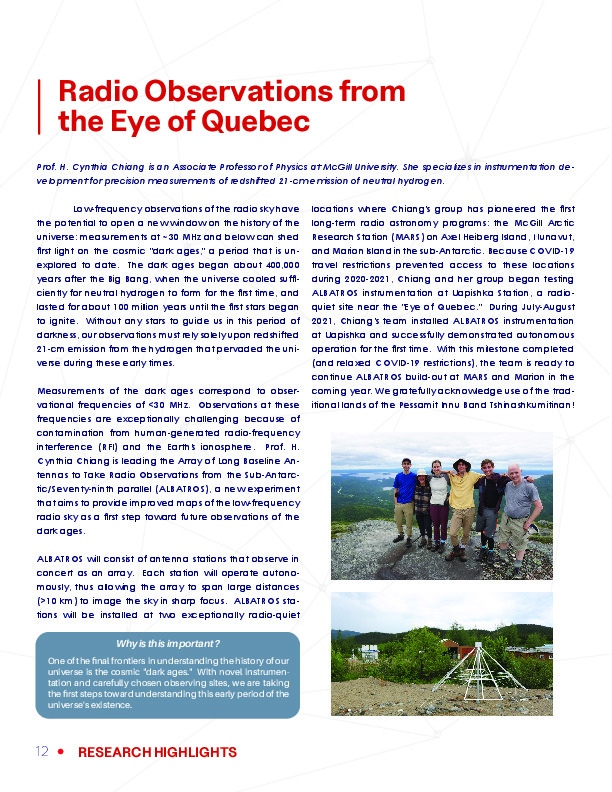 Radio Observations from the Eye of Quebec

Testing a new radio instrument in the northern part of Quebec. 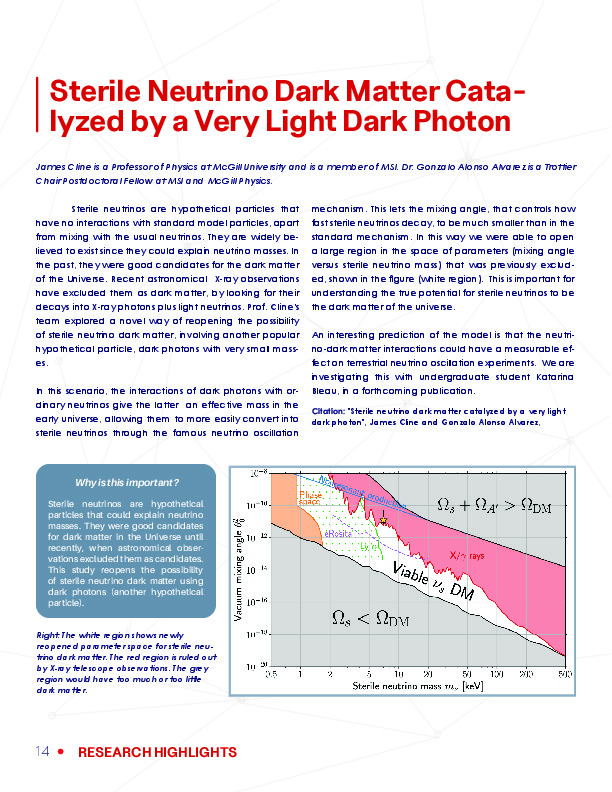 A new study that reopens the possibility of sterile neutrinos as dark matter. 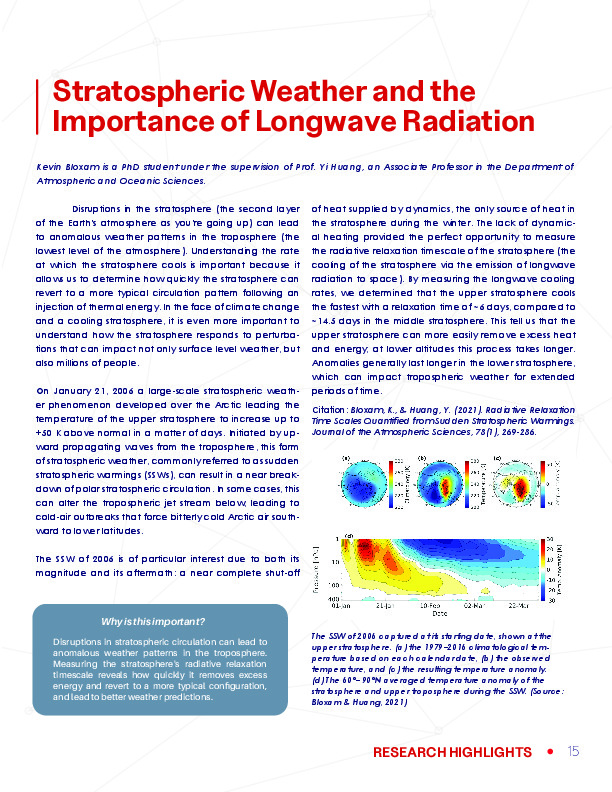 Stratospheric Weather and the Importance of Longwave Radiation 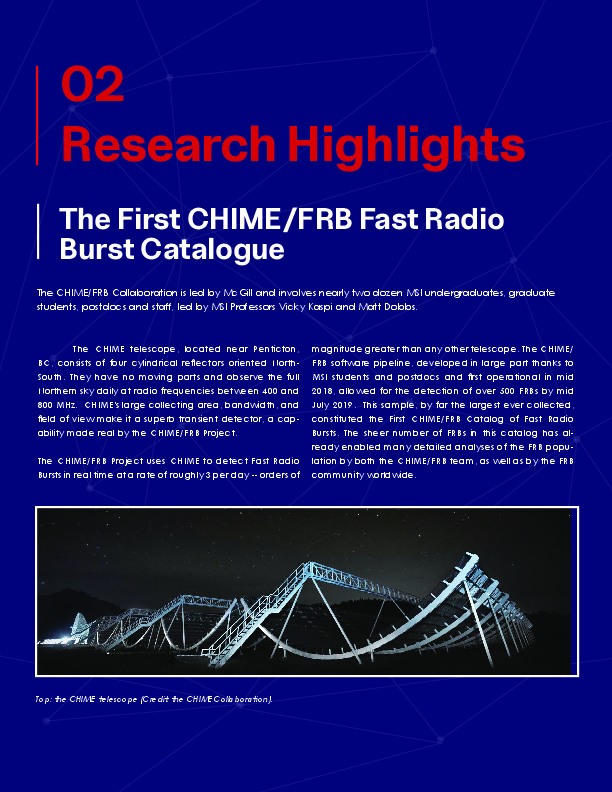 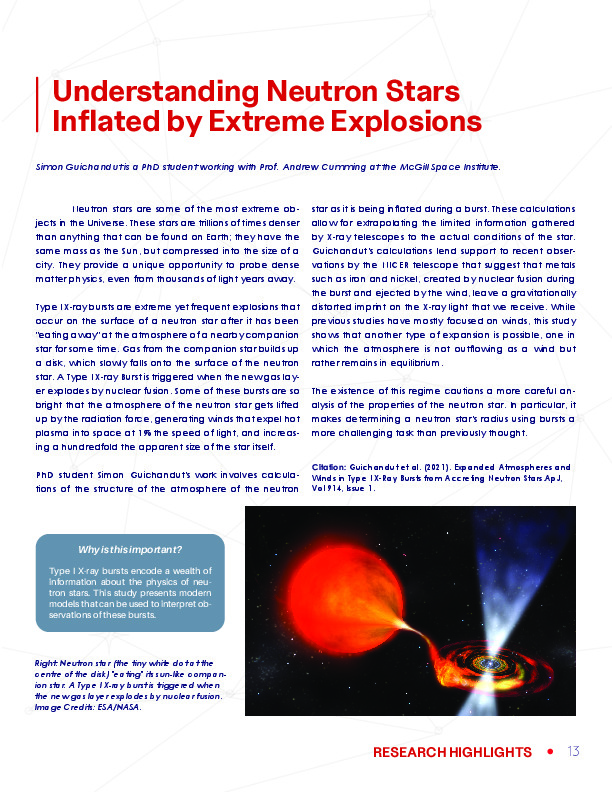 From the 2020 Annual Report

The CHIME/FRB team discovers the most powerful radio burst ever seen from a magnetar, offering a clue to the origins of the mysterious Fast Radio Bursts.

Uncovering the origin of super-Earths and mini-Neptunes

While we don't have any Super-Earth or mini-Neptune planets in our Solar System, they are the most common types of planets in the Galaxy. Prof. Eve Lee and undergraduate Nicholas J. Connors investigate their origins.

Searching for the birth of the first stars

MSI Research Associate Raul Monsalve is leading MIST, a new experiment to probe the Cosmic Dawn and elucidate the nature of the first stars.

Among the most extreme exoplanets discovered are the fiery lava planets, which give a glimpse of what the Earth must have looked like after it first formed. New simulations follow the evaporation and precipitation of minerals in the atmospheres of these exoplanets.

Solving the cusp/core problem of galaxies and galactic clusters

How dark matter is distributed in the inner parts of galaxies and galactic clusters are giving us clues about how dark matter might interact with itself and ordinary visible matter.

Prof. Natalya Gomez leads a study showing that polar ice sheets located at different ends of the Earth can influence each other through sea level changes. This insight helps us better understand the future of ice and water on Earth.

A challenge to inflationary cosmology

Prof. Robert Brandenberger and colleagues investigate how to reconcile models of the early Universe with quantum gravity.

PhD student Jing Feng and Prof. Yi Huang have developed an innovative approach to retreive temperature and humidity profiles above convective storms. This will help to understand how energetic storms influence the Earth's atmosphere.

A pan-Canadian team including several MSI researchers was recently awarded funding to build the Canadian Hydrogen Observatory and Radio-transient Detector (CHORD). Building on the success of the CHIME observatory, CHORD will revolutionise the study of the transient and cosmic radio sky.

From the 2019 Annual Report

Exploring the Cosmos from Nunavut

Almost nothing is known about the very first stars that were born in our Universe, and detecting their signals at radio wavelengths is exceptionally challenging. McGill researchers have demonstrated that the High Arctic presents a unique Canadian geographic advantage that may allow us to open a brand new window on the radio sky.

The Fingerprint of Life in the Transit Spectrum of Earth

Soon, we will be searching for life on exoplanets with transit spectroscopy using the James Webb Space Telescope. For her undergraduate thesis, Evelyn Macdonald created a transit spectrum of Earth that could serve as a benchmark in the search for exoplanets that are habitable.

Fast Radio Bursts or FRBs are one of the most interesting puzzles in astrophysics today. Their origin is unknown and studying these unpredictable and transient events is challenging. Canada's new CHIME radio telescope is a world-leading FRB detector transforming the field.

The search for life in our Solar System is among the highest priorities for space science, yet no modern instrument on a rover or spacecraft is able to definitively detect signs of life. Prof. Lyle Whyte's lab is developing the "MICRO-life detection platform" for definitive life detection.

After the discovery of the gravitational wave event GW190814, scientists were racing to find evidence showing whether this event was the first-observed merger between a neutron star and a black hole. MSI graduate student Nick Vieira led an imaging campaign with the Canada-France-Hawaii telescope CFHT to search for a kilonova counterpart to the event.

A Direct Glimpse into Cosmic Dawn

The origin story of how our Universe came to be is substantially incomplete, but the next few years will fill in a crucial part of our cosmic timeline - the era of Cosmic Dawn, when the first stars and galaxies formed.

A Little Theory of Everything

The standard model of particle physics is tremendously successful in describing the properties of the known particles, but it doesn't account for several key phenomena such as the nature of cosmic inflation and dark matter, and the fact that there is more matter than anti-matter in the Universe. In a new theory, MSI researchers present a minimal framework that supplies all the ingredients missing from the standard model of particle physics.

A Hot Jupiter with Unusual Winds

The westward hotspot offset on a hot Jupiter discovered by MSI graduate student Lisa Dang is the first of its kind. All plausible explanations call into question our current understanding of exoplanet science, making the planet CoRoT-2b a unique laboratory to study exoplanet atmospheric dynamics.

The Strongest Material in the Universe

Neutron stars have a crust that is implicated in pulsar glitches and magnetar outbursts, and limits the size of continuous gravitational wave emission. MSI Postdoc Matt Caplan used large molecular dynamics simulations to calculate the strength of the "nuclear pasta" layer at the base of the neutron star crust, finding it is much stronger than materials on Earth.

Prof. Natalya Gomez is part of the team deploying GNSS-R, a promising new technique for measuring changes in sea level near ice sheets. These measurements will inform our understanding of how the ice sheets respond to changes in climate on Earth, and will help guide future endeavors to other ice-bearing planetary bodies.

Development of a microbial life detection system for space missions

As public and private space sector activity increases, with plans for additional landers, sample caches for return to Earth, and even plans for permanent settlements on Mars, it’s important that we look for the presence of native microbial life in these environments before irreversible contamination occurs.

Superstring Theory and the Resolution of the Big Bang Singularity

Close to the Big Bang, the usual physical laws based on Einstein's theory of General Relativity break down. Superstring theory and in particular "String Gas Cosmology" holds the promise of a new understanding of the earliest moments of the universe.

The Fluid Case of Ancient Mars

Whether or not liquid water persisted on ancient Mars has important implications for its early climate. Was it ever as habitable as the Earth? If Earth and Mars were similar, what led to the stark differences observed today? The apparent conflict between a "cold and icy" and a "warm and wet" Mars is an important piece of the puzzle.

The discovery of GW170817 offered both the first gravitational waves detected from a neutron star binary and the first electromagnetic counterpart to a GW source. The ongoing detection by MSI researchers of an energetic outflow from this magnificent collision has challenged every model and brings new insight into the physics of neutron stars and short gamma-ray bursts.

The Canadian Hydrogen Intensity Mapping Experiment (CHIME) is a revolutionary "software telescope". Originally designed to study the accelerating expansion of the Universe and Dark Energy, it is also the world’s most powerful FRB detector.

Research lead by MSI graduate student Taylor Bell shows that an oddball planet, WASP-12b, reflects almost no light and may teach us about how clouds form on hot Jupiters, massive exoplanets that orbit extremely close to their host stars.

First Light for the CHIME Telescope

The First Host Galaxy for a Fast Radio Burst

The first precise localization of a fast radio burst and the first direct distance measurement. This result allows us to understand the energetics of FRBs, the type of environment in which it was formed and gives clues to what sort of objects could dwell there.

On the morning of August 17, 2017, MSI Professor Daryl Haggard was in her office when she received some exciting news — that LIGO (the Laser Interferometer Gravitational-Wave Observatory) had seen a new gravitational wave signal, ripples in spacetime made in the last seconds of the merger of massive, compact objects...

A Dark Origin of Matter

Why is there something, rather than nothing? While we know that there must have been more matter than antimatter created in the first moments after the Big Bang, we don’t know why.

From November 2016 to February 2017 the McGill Cosmology Instrumen- tation Laboratory team from McGill installed the readout system for the new South Pole Telescope microwave receiver at the Amundsen-Scott research station in Antarctica.

The new CHIME telescope will measure the expansion rate of the Universe through the critical time when Dark Energy became comparable to the energy density of matter. It will also be a powerful instrument to detect Fast Radio Bursts.

Prof. Matt Dobbs' research group at McGill specializes in the design, construction, and operation of novel instrumentation and experiments to explore the early universe.

Ice, Water and Earth in Antarctica

Prof. Natalya Gomez models the interaction between ice, water, climate, and planetary interiors, whether it be on Earth or other planets and moons in the Solar System.

Prof. Tim Merlis' research uses computer models to expose the physical mechanisms underlying changes in both past and future climates.

The Atmospheres of Hot Jupiters

The Limits of Microbial Life

Postdoctoral Fellow Jackie Goordial looks for cold-adapted microorganisms in one of the coldest and driest places on Earth.

The Search for Planet 9

Exoplanet expert Nick Cowan and cosmologist Gil Holder team up to hunt down the proposed Planet 9.