Public AstroPhysics Night - "The Oldest Light in the Universe" 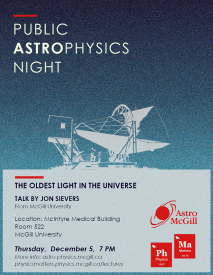 From high in the Chilean Andes to the South Pole to space satellites to balloons over Antarctica, astronomers are searching for faint echoes from the big bang. These echoes (called the cosmic microwave background or CMB) come from when the universe was just 400,000 years old, long before any stars or galaxies had formed. By studying the CMB in detail, we have transformed our understanding of the cosmos, and we now have precise measurements of how old the universe is, and what it is made up of (including an unambiguous signature of dark matter). I will explain where the CMB comes from, how we study it, and some of what we have learned from it.